Admittedly, I’m a little worked up about Melendez-Diaz. It’s a pretty exciting decision.

What’s worrisome, of course, is that the Supreme Court has the power to change it. Melendez-Diaz was a 5-4 decision, and Justice Souter was in the majority. Which means that if a Justice Sotomayor thinks that it was wrongly decided, it could be gone tomorrow.

More significantly, there is reason to think that her prior opinions are not exactly defendant-friendly. That said, maybe her biography means things will be a little more nuanced.

But, happily, someone asked her about Melendez-Diaz in her confirmation hearings!

Over at the Fifth Circuit blog, Brad Bogan has a great post about the effect of Melendez-Diaz on prosecutions for illegal reentry.

The Fifth Circuit, including Texas which is right on the border, has a tremendous caseload of illegal reentry cases. Thus, Melendez-Diaz and its effect on those prosecutions is of intense interest to folks in federal court in that Circuit.

Mr. Bogan rightly points out that Melendez-Diaz is crystal clear about the inadmissibility of a certificate that shows that a record does not exist in a particular file. These certificates have been a mainstay in illegal reentry prosecutions. He sums up:

END_OF_DOCUMENT_TOKEN_TO_BE_REPLACED

There was a fun article on the NPR webpage yesterday about summer teen movies and how they are, basically, movies about a crime spree. I have to admit, my knee-jerk reaction to just about any teen movie is to mentally chronicle the crimes that are being depicted, going back to when I first saw Ferris Bueller’s Day Off. Perhaps that reveals something deep about my chosen career path.

Regardless, there is, I think, an important lesson in this observation. When we watch these movies, such as Ferris Bueller’s day off, the audience’s reaction is not “Arrest the Scofflaw” but, rather, sympathy with the main character in the movie. Why is that? Why do we, as audience members, forgive criminal conduct when it’s done in the name of teenage fun?

This is an important question for people accused of a crime because the only meaningful difference between a moviegoer and a juror is whether the person was compelled to learn about the subject of the movie or trial. So why does the audience root for the person committing a crime when watching these movies?

Getting ready for a criminal trial is a stressful time. It’s particularly stressful for the relationship between the lawyer trying the case and the person who is trusting the lawyer to try the case well. The lawyer may see the case one way, and the client may have a very different, even inconsistent, view of how the case should be tried.

As a result, it is not uncommon for a person accused of a crime to try to find a new lawyer shortly before trial. The problem, however, is that often the court is uninterested in upsetting its schedule to allow a new lawyer to come into the case.

When does a court grant a motion for new trial? In the Fourth Circuit, which decides the rules for federal trial courts in Maryland, the Virginias, and the Carolinas, the case that describes how a trial court resolves a request for a new lawyer during a trial is United States v. Mullen.

The court should look at three things.

By way of example, consider a conspiracy charge. The elements of conspiracy, at least under federal law, are (1) an agreement (2) between two or more people (3) to do something criminal, and (4) an overt act in furtherance of the conspiracy by at least one coconspirator. The prosecutor has to prove, then, beyond a reasonable doubt, each of these elements. 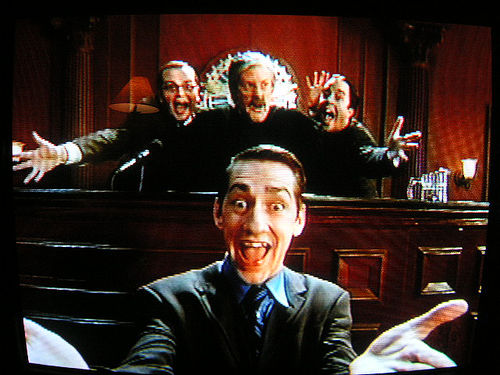 The jury is losing importance in our society. Fewer trials go to juries, fewer people want to serve on juries, and, yesterday, the D.C. Circuit said that in some cases when juries find a person not guilty of conduct he can still go to prison for it.

Yesterday, the D.C. Circuit has reaffirmed it’s prior holdings that a person who is acquitted of conduct at trial can be sentenced based on that very same conduct.

The court’s ruling, in essence, is that if a person has four counts against him, and wins on all but one, the judge can sentence him as though he’d been found guilty on all four counts, provided the final sentence doesn’t go above the statutory maximum sentence for that one count. Click here for coverage from the Legal Times Blog.

A juror who is excited about civic service wants his or her decision to matter. The juror wants to contribute, and to be respected. What this ruling says is that the system knows better than the jurors who participate in it. Even if a juror gave up weeks of his or her life for a trial, a probation officer who wasn’t even in the courtroom can argue that the jury was wrong, and a judge can ignore the jury’s decision to jack up a person’s sentence.

What does this mean for the average person accused of a crime in federal court?

Malcolm Gladwell recently wrote a wonderfully fun article about how underdogs win in the New Yorker. He profiles a few examples of how underdogs, like David in David versus Goliath, can win. To sum it up in a way that loses all the nuance and fun, Gladwell argues that successful underdogs (like David, George Washington, and a girl’s basketball team in California) win by playing within the rules, but in a way that violates the social conventions and norms that surround the activity the underdog is participating in.

So, for example, David laid down his sword and armor, and picked up a sling shot, in part so Goliath wouldn’t get close enough to land a blow. George Washington did not fight in ordered rows of men, but, instead, hid in the woods and picked off the English as they marched in bright red jackets through the woods (which were not bright red).

This approach has been successful, apparently, in the vast majority of cases where it’s been used militarily. It’s an inspiring story of cleverness triumphing.

Carolyn Elefant has written about what the conclusions from Gladwell’s article mean for the practice of law (Spoiler Alert: it’s good to be in a small firm). And one can see how this could be applied in lots of ways.

There is, though, a dark side to Gladwell’s article that isn’t as inspiring. Apparently, when underdogs keep fighting like underdogs, at some point they start to look like jerks.

What can Gladwell tell us about criminal defense?