Drug dealing is very illegal. It’s so illegal that if you deal drugs, and get caught and convicted, then deal drugs again later, Congress has set up a special way for you to spend even more time in prison.

Consider the person charged with a crime in the Fourth Circuit’s recent case of United States v. Simmons.

Mr. Simmons was convicted of possessing some marijuana that he was going to sell.* Because of the quantity of marijuana involved, he faced a mandatory minimum of five years in prison. 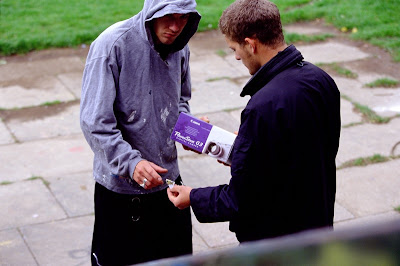 Congress has already said that if you have a prior felony conviction for selling drugs (or holding drugs while you think about selling them, which is, apparently, just as bad, see footnote * below), your mandatory minimum can double if the government files a notice about that prior conviction. It’s set out in 21 U.S.C. S 841 and 21 U.S.C. S 851.

This is another area where state law on criminal history intersects awkwardly with federal law.

This is a stickier problem than you might think, because lots of states have statutes that change the amount of prison time that a person can receive based on the person’s criminal history.

In Simmons, for example, Mr. Simmons could not have been sentenced to more than a year in prison on his prior state court marijuana charge because it was his first offense. Though, someone who had multiple prior convictions could have.

Let’s think about that for a second – the point of this law is to punish people who were really bad before. Doesn’t that suggest that what we care about is how bad this particular person was, rather than some generic bad guy?

For the Fourth Circuit, before Simmons, no. The old Fourth Circuit rule was that you consider the person with the absolute worst criminal history possible. If that hypothetical guy could have been sent to prison for more than a year, then the state crime is a serious one, regardless of whether it was serious for the actual person who is in front of the court now.

This meant that Mr. Simmons, even though he couldn’t have been sentenced to more than a year on his prior state conviction, he was treated as though he could have been. As a result, his mandatory minimum doubled from five years to ten years.

The Supreme Court, though, has recently decided Carachuri-Rosendo v. Holder. That case held that, in an immigration case where the courts are directed to look at prior convictions, you look not at what a hypothetical recidivist – a person doing life on the installment plan, as it were – could have been sentenced to, but the actual person who is going to be affected by the prior conviction.

In Simmons, the Fourth Circuit held that the Supreme Court’s position in the immigration case applies in criminal cases. It, therefore, concluded that Mr. Simmons had not committed a prior felony; his mandatory minimum could not be increased because of that prior conviction.

* The technical name of the offense is possession with intet to distribute.

We don’t do that in other areas of criminal law. If I get caught with a ski mask, a gun, and Google maps directions to a bank, I don’t get punished as though I’ve already robbed a bank.

The war on drugs makes for some odd law.